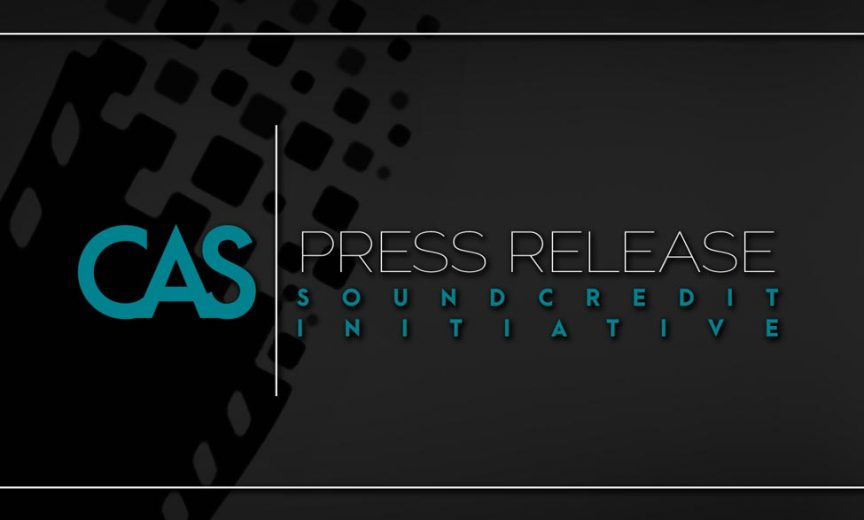 FOR IMMEDIATE RELEASE — The Cinema Audio Society recently joined together with the Motion Picture Sound Editors and The Association of Motion Picture Sound in sending an open letter to the entertainment industry regarding grouping together key sound professionals and positioning them in the credits in proximity with other key roles.

“This is a multi-organizational effort by the overall sound community to change the culture of recognition towards the art and craft of sound for picture,” said CAS President Karol Urban. “It also compliments the new Academy Awards structure of honoring sound editorial and mix under than same designation by presenting the key members of the sound team in solidarity to the viewer.”

The Cinema Audio Society, a philanthropic, non-profit organization, was formed in 1964 for the purpose of educating and informing the general public and the motion picture & television industry that effective cinematic sound is achieved by a creative, artistic and technical blending of diverse sound elements.

The complete text of the letter follows.

Though film is often considered a visual medium, removing the sound component will demonstrate exactly how movies “tell” the story, thrill audiences, and become the “voice” of the Filmmaker. As George Lucas has famously been quoted, “Sound is 50 percent of the movie-going experience.”

Production Sound Mixing, Sound Editing, and Re-recording Mixing all contribute to the complete sound experience and are eligible for recognition of major awards. It is remarkable that these persons who receive nominations for numerous international awards, including those from AMPAS and BAFTA, are generally not afforded prominent screen credits that are representative of their creative contribution to the film. We seek your help in correcting this imbalance.

We believe that the complete sound design of the film is the responsibility and ownership of these key sound roles. The Production Sound Mixer, Supervising Sound Editor(s), Re-Recording Mixer(s), should share a single card and be appropriately positioned within the same proximity of the other key roles, such as Director of Photography, Film Editor, Production Designer, Costume Designer, Unit Production Manager, 1st Assistant Director.

Such a screen credit would assure that individuals who were principally responsible for the creative direction of the soundtrack would be clearly identified and acknowledged by the audience.

Example:  ONCE UPON A TIME IN HOLLYWOOD as a single card following UPM(s),   1st and 2nd AD

Next Story:
CAS SUMMER EVENT SERIES 2020: SCORING THROUGH THE WEB