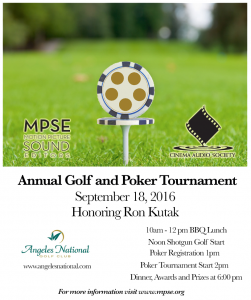 Los Angeles, August 2016 – The Cinema Audio Society (CAS) has announced that it will co-sponsor with the Motion Picture Sound Editors the 8th Annual MPSE Golf and Poker Tournament, September 18, 2016 at the Angeles National Golf Club in Sunland, California. Proceeds from the event benefit the MPSE’s Ethel Crutcher Scholarship Fund, which provides mentoring and support for student sound artists, as well as the organization’s work in promoting the role of sound in movies, television, gaming and other entertainment media.

This year marks the first time that the Cinema Audio Society has joined the MPSE in sponsoring the event. Serving as Honorary Chairman will be Ron Kutak, the longtime National Executive Director of IATSE Editors Guild Local 700, who is retiring from his post November 1.

CAS President Mark Ulano expects the Golf and Poker Tournament to be the first of many joint ventures between the two sound organizations. “The mutual members collaborate to create the soundtracks people hear when they go to the movies or watch television,” Ulano says. “So, it’s only natural that we should work together on professional and philanthropic activities that promote the art of sound. This event provides our members many ways to join in as they can participate in either the Golf Tournament, lunch and dinner or the Poker Tournament and dinner, or they can attend as a spectator and simply buy a ticket for the dinner. All in all a great way to spend a day with friends and colleagues.”

“The golf tournament is one of our most popular events of the year,” says MPSE President Tom McCarthy. “It’s a day for networking with sound artists, filmmakers, vendors and studio executives. The event is open to anyone who is interested in playing golf or poker, or simply wants to socialize and support an organization that works hard all year in behalf of the art and craft of sound. I am extremely proud and excited that the CAS is co-sponsoring this event as both organizations support the art of sound and the complete sound community.”

The day’s activities will include a scramble-style golf and poker tournaments, with trophies and prizes for 1st, 2nd and 3rd place finishers in each event. The golf tournament will also feature a hole-in-one contest with a $10,000 prize and a putting contest with a $5,000 prize. Other games and surprises will occur throughout the day. The event will culminate with an awards dinner. More information can be found at https://cinemaaudiosociety.org/